Colchicine is a medicine used to help prevent gout flares in adults.1 Gout is a form of inflammatory arthritis that occurs when too much uric acid builds up in the joints, leading to chronic swelling and often intense pain.2,3

There are several stages of gout. The most serious involves frequent gout flares, which develop in people whose uric acid levels have been high for many years.4 Once infrequent, flares begin to occur regularly, and the pain increases in severity and duration.4 Joint damage may also occur, which can lead to loss of mobility.4

What you should know about colchicine

If you suffer with gout flares, here are three important things to know about colchicine 0.6 mg capsules:

1. Colchicine has been used for centuries to prevent gout attacks5

Colchicine was originally derived from a plant called the autumn crocus (Colchicum autumnale).5 The drug was prescribed for gout flare prevention for many years before manufacturers were required to have formal approval from the U.S. Food and Drug Administration (FDA).6 Until this time, patients had grown accustomed to paying approximately 10 cents a pill for this daily medication.6

2. Colchicine, a once-affordable drug, became too costly for many patients6

In 2009, the FDA approved the first branded version of colchicine.6 All other formulations, which had not gone through FDA’s review process, were removed from the market at that time.6 Patients who tried to refill their prescriptions found that their long-used colchicine medications were no longer available.6

The only colchicine option at this time was a newly branded drug offered by a pharmaceutical company that charged $5 per pill—50 times the price of colchicine pills previously available.6

As of today, West-Ward remains the only manufacturer offering colchicine therapy in capsule form.

Mitigare® (colchicine) 0.6 mg Capsules, and its authorized generic, colchicine 0.6 mg capsules, are a distinctive two-tone blue color. This pop of color may help adult patients distinguish these capsules from other medications they take.8,9

*For all eligible patients 18 years or older who are legal residents of the United States or Puerto Rico. First 30 days are as little as $0 only for eligible patients. Maximum savings of $65 on the first fill and $50 on refills. Please see complete Terms and Conditions available at Mitigare.com.

Discover the benefits of a gout-friendly diet that may reduce your risk of future flares.
INFOGRAPHIC 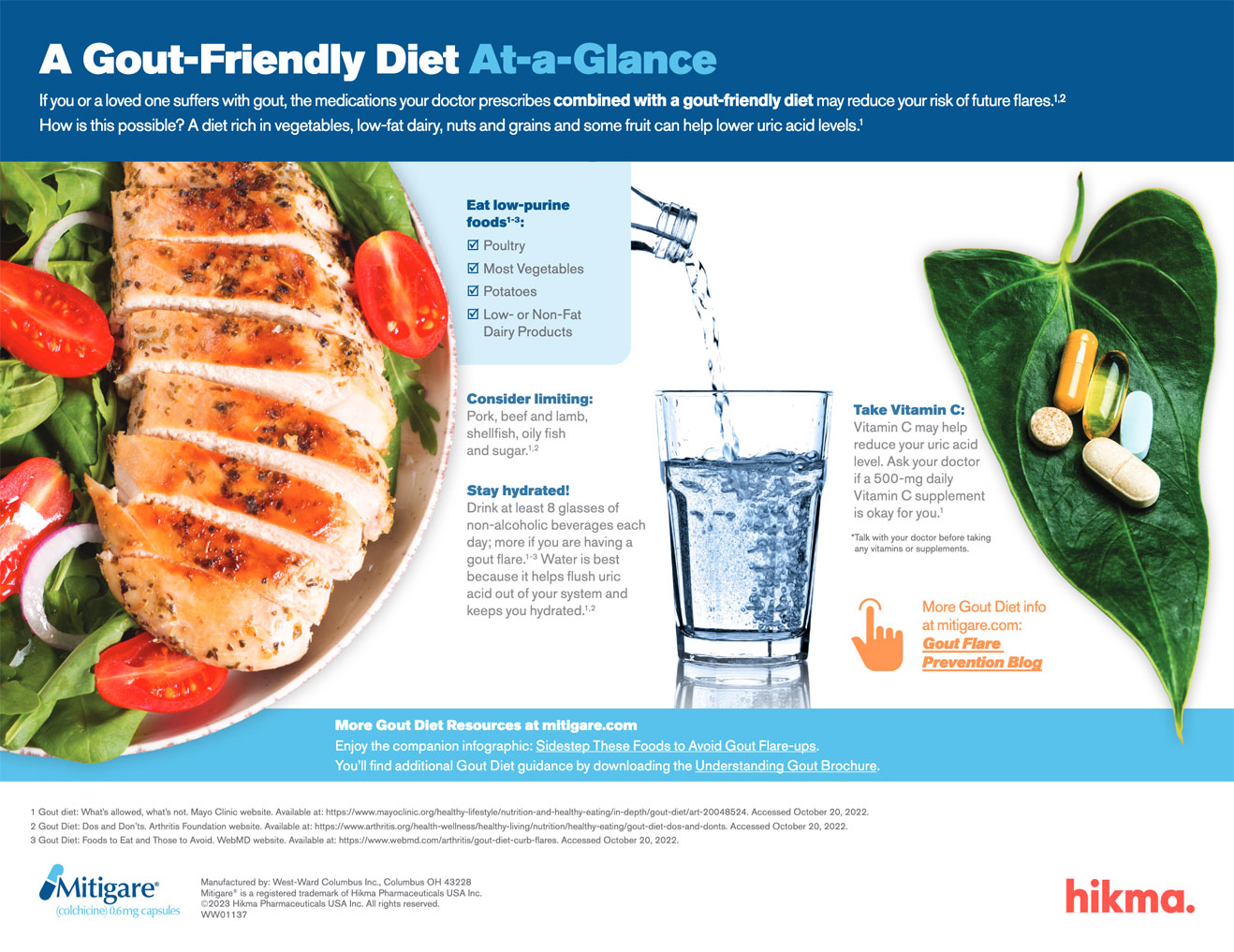 Colchicine 0.6 mg capsules are contraindicated in patients with renal or hepatic impairment who are currently prescribed drugs that inhibit both P-gp and CYP3A4.Combining one of these dual inhibitors, or a medication that inhibits either P-gp or CYP3A4, with colchicine has resulted in life-threatening or fatal colchicine toxicity. Patients with both renal and hepatic impairment should not use Mitigare®. The safety and effectivenes of Mitigare® for acute treatment of gout flares during prophylaxis has not been studied. Mitigare® is not an analgesic medication and should not be used to treat pain from other causes.