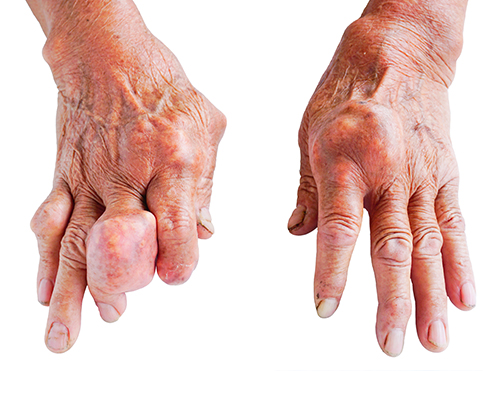 Anyone who has ever had a gout flare knows how excruciating the condition can be.1 However, the agony of gout isn’t necessarily the most significant concern associated with the disease.2 In addition to painful attacks, the risks of uncontrolled gout can include joint disfigurement and destruction, kidney problems, hypertension and heart disease. Uncontrolled gout can even negatively affect quality of life.2 Read on to learn why it is so important to keep gout under control and find out how.

Gout is caused by excess uric acid in the bloodstream.1 If uric acid levels stay high for a long time, urate crystals can build up in the joints.2 In some patients, these crystals grow into large, whitish nodules called tophi.1,3 Often visible under the skin, these unsightly lumps can appear around the joints as well as in the surrounding tissue.3 Over time, tophi can affect your ability to function normally, especially if they develop in the hands and feet.4 Once gout disease becomes chronic, the joints may be permanently damaged and deformed.3

Urate crystal buildup in the kidneys can lead to all kinds of problems, including kidney stones.5 In addition to causing unbearable pain, kidney stones can be dangerous because they can block the urinary tract and lead to infection.5 If left untreated, kidney stones can even result in chronic kidney disease and ultimately kidney failure.5

Many studies have shown that there is a link between uric acid and heart disease.6 People who have gout are more likely to have heart health issues, including blocked arteries, heart attack, stroke and heart failure.6 According to the Gout Education Society, research has shown that having untreated gout can double a person’s risk for heart attack or stroke.6

Gout can take a tremendous toll on the lives of those who suffer with it.7 A 2019 survey conducted by the Gout Education Society revealed that four in 10 people say their quality of life is not as good because of gout, and one in four says they feel that gout controls their life.7 These data support the organization’s 2016 survey findings, which revealed that nine out of 10 people with gout worry about it, and more than four in 10 say they can’t imagine anything more painful than a gout attack.8

How you can protect against uncontrolled gout

Although gout is considered a serious disease, only about a third of patients get the gout treatment they need to avoid future flares and complications.7 If you have gout but are not visiting your doctor regularly, schedule checkups every six months and have your uric acid levels checked at each appointment.9 A healthy uric acid level is 6.0 mg/dL, so your doctor may recommend a urate-lowering therapy (ULT) such as allopurinol if you are not already taking one.10 He or she may also recommend that you begin colchicine therapy with a medication called Mitigare® (Colchicine) 0.6 mg Capsules (or Generic Colchicine Capsules) to help prevent gout flares.11,12