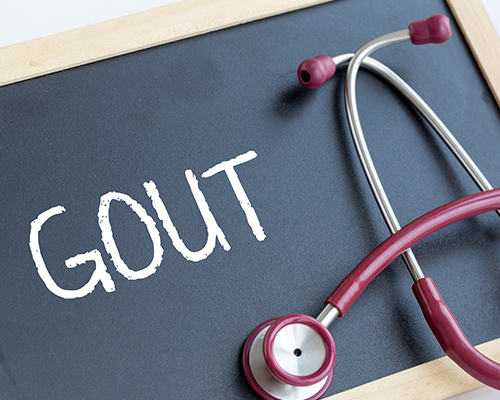 People with gout, a painful form of inflammatory arthritis, sometimes have an initial occurrence, followed by a long period of time when the gout is in remittance before it flares again.  Eventually, gout flares may occur more frequently and gout becomes a chronic condition for many sufferers.1 Here’s a look at symptoms and the top signs you may want to see a doctor for gout.  If you or a loved one is experiencing these signs, it’s time to find out whether it’s gout and how you can prevent future flares.

Uric acid builds up over time, so it may take months or even years for symptoms to arise.  A gout attack can last from three to 10 days, and then may not recur for months or even years.  Eventually though, flare-ups become more frequent and painful.  Doctors can help prevent gout flares by treating prophylactically.2  Talk to your doctor about whether available preventative medications may be right for you.

There are several stages of gout. The ultimate and most serious involves gout flares, which may develop in people whose uric acid levels have been high for years. Once infrequent, attacks may become more regular, with pain that can be more severe and long-lasting. Without seeing a doctor and taking preventative measures, it is possible that joint damage, as well as a loss of mobility, can occur. Gout flares are also associated with other serious health issues, including cardiovascular disease and diabetes.3

Some signs that gout may be progressing:3

See this checklist of foods your doctor may recommend that you limit or avoid.
INFOGRAPHIC 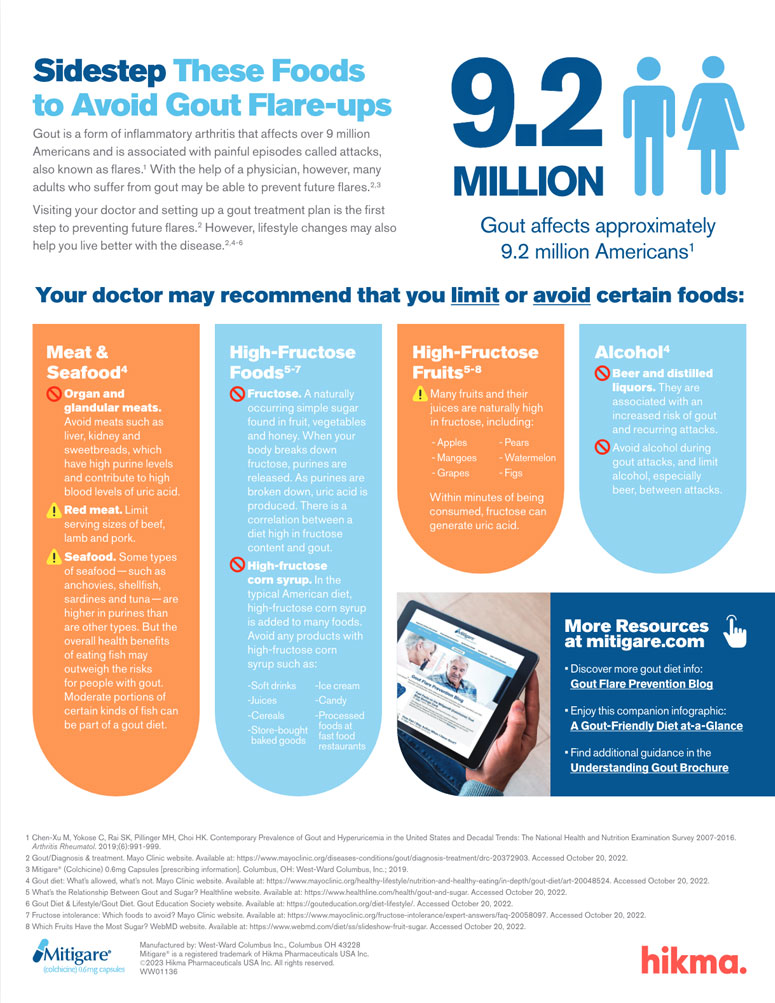 Medication that your doctor may prescribe to help prevent flares

When you’re diagnosed with gout, your doctor may prescribe a medication that can help prevent gout flares.  One such medication is Mitigare® (colchicine) 0.6 mg Capsules, for the prophylaxis of gout flares in adult patients. The safety and effectiveness of Mitigare® for acute treatment of gout flares during prophylaxis has not been studied. Mitigare® is not an analgesic medication and should not be used to treat pain from other causes.

The active ingredient in Mitigare®, colchicine, has been used for centuries to prevent gout flares.  Colchicine was originally derived from a plant, sometimes called the autumn crocus.  It was found to be effective for lowering levels of uric acid in the blood.4  The most commonly reported adverse reactions with colchicine are gastrointestinal symptoms, including diarrhea, nausea, vomiting, and abdominal pain.  Colchicine 0.6 mg capsules are contraindicated in patients with renal or hepatic impairment who are currently prescribed drugs that inhibit both P-gp and CYP3A4.  Patients with both renal and hepatic impairment should not be given Mitigare®.

Remember, the first step if you think you may have gout, or experience symptoms, is to see your doctor.  And, during the visit, ask what you can do to help prevent flares and whether there is a prescription medication that may be right for you as part of your prevention plan.

NOTE:  This article was not written by a medical professional and is not intended to substitute the guidance of a physician.  These are not West-Ward’s recommendations for gout flare prevention, but rather facts and data collected from various reliable medical sources.  For a list of resources and their attributing links, see below.

This rare evenly balanced hybrid called McFlurry strain will take your flavour and high to a whole new level!