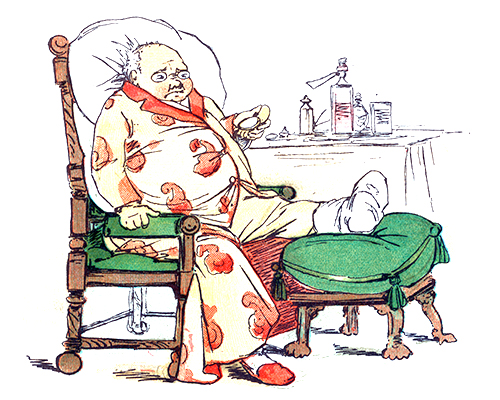 First identified by the Egyptians around 2640 BC, gout is one of the earliest known diseases.1 Millions of people (mostly men) still suffer with it today.2 Fortunately, scientists have learned a lot about this potentially debilitating condition over the past few thousand years.2,3 Read on to find out more about the history of gout disease.

Although the ancient Egyptians were the first to recognize it1, the first official clinical description of gout came from Hippocrates (460–370)3. About a century later, Aretaeus the Cappadocian proposed that gout disease was caused by a toxin in the blood (later identified to be uric acid).3

The first person known to use the word “gout” was the Dominican monk Randolphus of Bocking in the early 1200s.1 The term comes from the Latin word gutta, or “drop.”1 In those days, it was believed that an excess of one of the four “humors” (bodily fluids, which, when balanced, were thought to maintain health) would flow or “drop” into a joint, causing pain and inflammation.1 Variations of the term are used to this day across a number of languages—the English “gout,” the French “goutte,” the Spanish “gota,” the Italian “gotta” and the German “gicht.”3

In the seventeenth century, a number of advances were made in the science of gout.3 Englishman Thomas Sydenham was the first to recognize the chronic and acute aspects of gout disease (hyperuricemia and gout attacks, respectively).3 He also differentiated gout from other forms of arthritis.3 Anton von Leeuwenhock, inventor of the microscope, was the first to examine and describe tophi, finding that it was made up of the tiny, needle-like particles that Swedish chemist Carl Scheele later identified as urate crystals.3

The next major contributor to the study of gout was physician and professor Alfred Baring Garrod.3 He conducted his groundbreaking research at the University of London, demonstrating the relationship between high levels of uric acid in the bloodstream and the development of gout.3 His son, Archibald, carried on his father’s work, making strides in the science of gout disease well into the 20th century.3

Searching for relief for gout disease

Many different methods have been used to manage gout over the years. Early treatments from Hippocrates’ day included barley water, purging and counterirritation (scorching the veins near the affected joint).3 Bloodletting was also very popular among physicians at the time.3 These “treatments” would be used for the next 1000 years.3

Although there is evidence that colchicine was used in ancient Greece more than 2000 years ago, it was first used as a specific treatment for gout by Byzantine physician Alexander of Tralles around 600 AD.1 Not long after that, colchicine fell out of use for several hundreds of years, only to be rediscovered by Austrian physician Baron Anton de Storck in the mid-1700s.1 Perhaps the most notable user of an early form of colchicine was Benjamin Franklin.3 therapy (eg, Mitigare® [Colchicine] 0.6 mg Capsules, Generic Colchicine Capsules) is still used today to prevent gout flares.4

More than a hundred years passed before the next major advance in gout management.1 Urate-lowering therapies (ULTs), which help the body flush out uric acid via the kidneys, were first used in the late 1800s.1 In the 1940s, a ULT called allopurinol was discovered by drug manufacturer Burroughs Wellcome.5 Allopurinol ultimately earned a Nobel Prize in Physiology and Medicine for Gertrude B Elion and George H Hitchings5, and is considered the most commonly used ULT even today6.