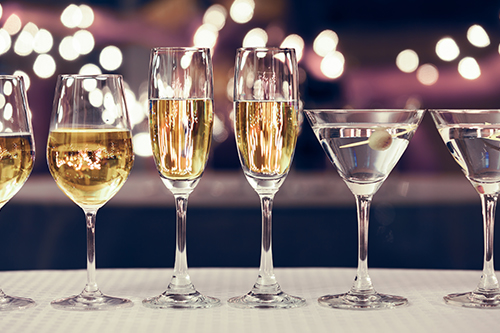 Gout is a common form of inflammatory arthritis. It is caused by a condition called hyperuricemia. Hyperuricemia happens when there is too much uric acid in the body. When this occurs, uric acid crystals can build up in the joints, causing pain and swelling.1

Uric acid is made when the body breaks down purines. Purines are naturally occurring substances found in many foods and drinks. In healthy adults, uric acid dissolves in the blood and goes from the kidneys into the urine. Sometimes the body either produces too much uric acid or the kidneys process too little uric acid. In either case, uric acid builds up and can form sharp, needle-like urate crystals in a joint or surrounding tissue.2 Along with severe pain, gout can cause swelling, tenderness, redness and/or warmth in the affected joints. Adults with gout also suffer with lingering discomfort and limited range of motion.3

Adults with gout need to understand how drinking alcohol can affect their condition. Consuming any type of wine, beer or spirits can raise uric acid levels and cause a gout flare.4,5 In fact, a 2006 online case-crossover study of 633 adults found that consuming alcohol can trigger a gout attack within 24 hours.5

The more drinks consumed, the greater the odds of a gout attack.5 While a single serving of wine, beer or spirits (straight or in a cocktail) in a 24-hour span did not significantly increase the chance of repeat gout flares, there was a 36 percent increase in risk among people who had more than one or two drinks per day. A 2014 online case-crossover study of 724 adults (78 percent of whom were men) showed that, in people who had two to four drinks per day, the risk was 50 percent and continued to rise in proportion with the amount of alcohol consumed.6

The results of the 2014 study are notable because they refute a widely held belief that wine is less likely to trigger a gout flare than other types of alcoholic beverages. In reality, wine can be as significant a trigger as other types of alcohol. According to the 2014 study, just one or two glasses of wine in the day before a flare raises the risk of recurrent attacks by 138 percent. That is more than double the risk compared to drinking no wine at all.6

These research results apply to men; findings for women are less clear because fewer women participated in the study. However, the study’s lead author pointed out that the risk of gout attacks in women is generally similar to that of men. He counsels his own patients with gout to avoid alcohol to reduce the risk of gout flares.6

Stay well hydrated by drinking beverages that do not contain sugar or alcohol. To help prevent gout flares, ask your doctor about the recommended gout diet, which limits your intake of purines.4