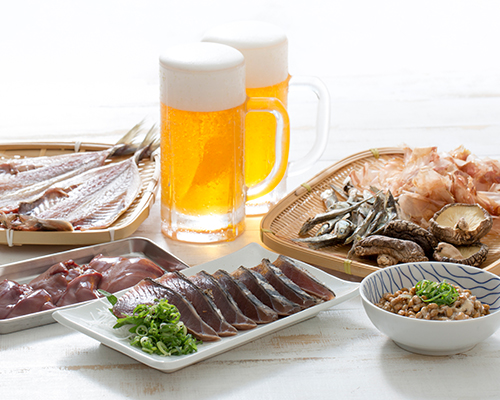 People affected by gout actually have a lot of power over the course of their disease. That’s because what a person chooses to eat and drink can have a direct effect on gout symptoms.1

Gout is a type of inflammatory arthritis caused by a build-up of uric acid crystals in the joints and other areas of the body and surrounding tissues. Adults with gout suffer from episodes of pain, redness, swelling and/or extreme tenderness in one or more joints, most commonly the big toe.1

What you eat and drink can affect gout

Humans have suffered with gout since ancient times. Before the rise of modern medicine, it was believed that gout was a disease of the wealthy. This is because only they could afford to eat a lot of purine-rich foods, such as meat, seafood and alcohol.2 Purines are chemical compounds found in some foods and drinks that the body breaks down into uric acid. Generally, people can process the uric acid that results from purine-rich foods. In people with gout, however, consuming foods and drinks with too many purines can pose a great problem.1

There is no set diet regimen for gout, but adults with gout are encouraged to eat healthfully.3 To help prevent gout flares, foods and beverages containing a lot of purines should be avoided.3 These include:3

In place of these, choose lower-purine foods, such as:3

Avoid sugar-sweetened beverages, which can increase the prevalence of gout flares.4 Abstaining from alcohol is also important for two reasons. First, because alcohol provides additional purines, strengthening the body’s production of uric acid, and second, because alcohol affects how well the kidneys remove uric acid from the body. Water and non-alcoholic beverages can help remove uric acid crystals from the system.5

Ask your doctor about vitamin C and coffee

Vitamin C may help lower uric acid levels. Ask your doctor if taking a vitamin C supplement is right for you.2

Drinking caffeinated coffee may also be associated with a reduced risk of gout flares. Before you change your coffee habits, however, speak to your doctor about caffeine. This is especially important if you have other health problems, as caffeine may make these problems worse. 2

If you are diagnosed with gout, your doctor may prescribe a medication that can help prevent gout flares. One such medication is Mitigare® (colchicine) 0.6 mg Capsules. Mitigare® is prescribed for the prevention of gout flares in adult patients.

The active ingredient in Mitigare®, colchicine, has been used for centuries to prevent gout flares. Colchicine was originally derived from a plant, sometimes called the autumn crocus.

The safety and effectiveness of Mitigare® for acute treatment of gout flares during prophylaxis has not been studied. Mitigare® is not an analgesic medication and should not be used to treat pain from other causes. Consult with your doctor about other medications you are currently prescribed. Colchicine 0.6 mg capsules are contraindicated in patients with renal or hepatic impairment who are currently prescribed drugs that inhibit both P-gp and CYP3A4. Combining these dual inhibitors with colchicine in patients with renal or hepatic impairment has resulted in life-threatening or fatal colchicine toxicity. Patients with both renal and hepatic impairment should not be given Mitigare®.

Fatal overdoses have been reported with colchicine in adults and children. Keep Mitigare® out of the reach of children. Blood dyscrasias such as myelosuppression, leukopenia, granulocytopenia, thrombocytopenia, and aplastic anemia have been reported with colchicine used in therapeutic doses. Monitor for toxicity and if present consider temporary interruption or discontinuation of colchicine. The most commonly reported adverse reactions with colchicine are gastrointestinal symptoms, including diarrhea, nausea, vomiting and abdominal pain. The safety and effectiveness of Mitigare® for acute treatment of gout flares during prophylaxis has not been studied. Mitigare® is not an analgesic medication and should not be used to treat pain from other causes.

Speak with your doctor about which foods and drinks can help you manage your gout, and before starting any new exercise regimen. Your doctor can also tell you about prescription medications that may help.