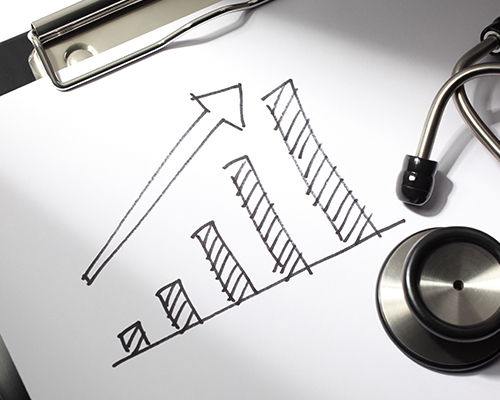 Gout is an old disease1, but recent research shows that it affects more people today than it has in centuries past2. In fact, a 2018 population-based study found that the number of people who suffer with it has doubled over the past 20 years.3 Read on to learn more about this chronic condition, why gout is becoming more common and perhaps most important, how it can be managed.2,3

Gout disease, the most common form of inflammatory arthritis, is caused by a condition called hyperuricemia (the medical term for having too much uric acid in the bloodstream).4 This excess uric acid can cause crystals to form around one or more of the joints in the body.2 At times, these crystals can trigger sudden, excruciatingly painful episodes called attacks, or flares.2 Although men are more likely to have gout disease, gout affects many women as well.5

Gout is one of the earliest known diseases.1 It dates back to ancient times, and was first identified by the Egyptians back in 2640 BC.1 Although it was believed for many years that gout was caused primarily by eating too much rich food and drinking too much alcohol, scientists recently learned that it is more likely to be a result of heredity.6,7 One of the most significant breakthroughs in the history of gout to date was the US Food and Drug Administration’s approval of allopurinol, which is a urate-lowering therapy (ULT).8 As the name suggests, ULT can help reduce the amount of uric acid in the bloodstream, essentially addressing the root cause of gout.8 Many people who take allopurinol (or another ULT) also take a drug called colchicine to help prevent gout attacks, or flares.9

The number of Americans affected by gout disease is rising.3 A study published in 2019 revealed that approximately 3.9 percent of Americans have gout, or about 9.2 million people (5.9 million men and 3.3 million women).5 Even more concerning, the results of this 2018 population-based study revealed that there were about twice as many newly diagnosed gout cases in 2010 as there were in 1989.3 But international research suggests that it’s not just the Americans who are seeing more gout cases among their ranks.2,3 Data from a number of countries indicate that gout is becoming more prevalent all over the world.2

A dramatic increase in gout disease

Gout has been a significant health issue since ancient times and remains so today.1 But why the sudden, dramatic increase in the number of US cases?3 Studies indicate that this may be because Americans are exhibiting more of the risk factors associated with gout than ever before.3 These risk factors include obesity, age, diabetes, chronic kidney disease and aspirin use.3 In addition, the uric acid level in the body naturally increases with age.3 So as we get older, our risk of developing hyperuricemia (ie, the root cause of gout) is likely to increase as well.3

Diagnosed and treated in its early stages, gout is a manageable condition for most people.10 If you are already being treated with a ULT but are still suffering with flares, see your doctor as soon as you can. Your doctor may add colchicine (eg, Mitigare® (Colchicine) 0.6 mg Capsules or Generic Colchicine 0.6 mg Capsules) to your regimen to help prevent flares.9,11 Before your appointment, consider downloading and completing the Doctor Visit Form (from Resources for Patients) to help you get the conversation started.