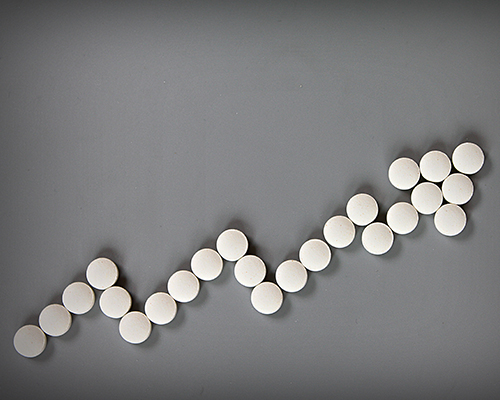 As you’re probably aware, prescription drug prices in the US have been creeping up for years.1 Some have been rising more quickly than others, however.1 The price of Colcrys® (colchicine, USP) tablets, for example, has increased by more than 40 percent since 2013.2 Keep reading to find out more about the cost of Colchicine and how it has changed in recent years.

In 2006, the US Food and Drug Administration (FDA) announced a new program called the Unapproved Drugs Initiative (UDI).3 The UDI required drug manufacturers to get FDA approval for their products by proving their safety and effectiveness through costly research.3 Manufacturers who chose not to comply were forced to remove their products from the market.3 Even though Colchicine products had been prescribed for decades to prevent gout attacks, none of them were FDA-approved prior to 2009.4

A radical price increase in the cost of colchicine

In 2009, the FDA approved Colcrys® (colchicine, USP) 0.6 mg tablets.4 Colcrys entered the market at about $5 per tablet—a significantly higher cost of colchicine than the pre-existing generics, which cost about nine cents per pill.4 But when the FDA ultimately banned the sale of unapproved Colchicine products in 2010, patients were forced to pay about 50 times more than they had before for their gout flare prevention therapy.4

In 2014, Hikma5 received FDA approval for the first and only alternative colchicine product for gout flare prevention in adults—Mitigare® (Colchicine) 0.6 mg Capsules. Mitigare® and Authorized Generic Colchicine 0.6 mg Capsules launched the following year, generating competition and introducing the possibility for people with gout to save on the cost of colchicine therapy compared to Colcrys®. Mitigare® and Generic Colchicine Capsules remain the lowest-priced Colchicine products available today.2

A broad spectrum of coverage

Another way Hikma is making Colchicine therapy more affordable is by ensuring broad access to the drug for the people who need it. Mitigare® (Colchicine) 0.6 mg Capsules and Generic Colchicine Capsules are covered by 82 percent of major health plans†, including:

By lowering the overall cost of treatment, Hikma is committed to improving access to gout flare prevention. To find out more about Mitigare® and Generic Colchicine Capsules and the True Blue Savings Program, see complete Terms & Conditions and eligibility requirements.

Eligible patients can receive Mitigare® or Generic Colchicine Capsules for as little as $0 for the first 30 days and get refills as low as $5.*
DOWNLOAD

*For all eligible patients 18 years or older who are legal residents of the United States or Puerto Rico. First 30 days are as little as $0 only for eligible patients. Maximum savings of $65 on the first fill and $50 on refills. Please see complete Terms and Conditions.