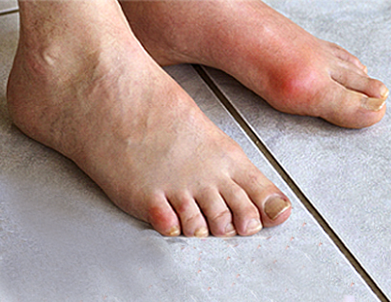 The big toe often is where gout attacks first. Gout attacks also can occur in the heels, instep, ankles, knees, elbows, hips, thumbs, and fingers. Symptoms of gout include intense pain that often begins in the middle of the night, tenderness, redness and/or warmth in the affected joints, and lingering discomfort.1 If you’ve experienced what might be a gout attack or gout flare, see your doctor to learn more about gout and the prescription medication available to prevent gout flares. Here is some important information that you need to know if your doctor has diagnosed you with gout.

Gout is a type of inflammatory arthritis which results from too much uric acid building up in the body, leading to the chronic swelling of joints. As a result, adults with gout may have a limited range of motion. This disease affects 8.3 million Americans.2

Uric acid builds up over time, so it may take months or even years for symptoms to first appear. Once the initial attack has occurred, however, flares usually return, lasting from three to 10 days. While the second flare may not occur again for months or even years, eventually flare-ups become more frequent and even more painful. Ask your doctor about preventing gout flares.2

There are several stages of gout. The ultimate and most serious stage involves gout flares, which may develop in people whose uric acid levels have been high for years. Once infrequent, flares now occur regularly, with pain that’s more severe and long-lasting. Without treatment, it is possible that joint damage, as well as a loss of mobility, will occur. Gout flares are also associated with other serious health issues, including cardiovascular disease and diabetes.3

Once uric acid levels in the blood reach too high a level, gout has become a chronic problem.3

Signs that gout is progressing3

What can I do to help prevent gout flares?

Colchicine, the active ingredient in Mitigare®, can help prevent gout flares in adults.9

Fewer total flares with colchicine 0.6 mg than with placebo9 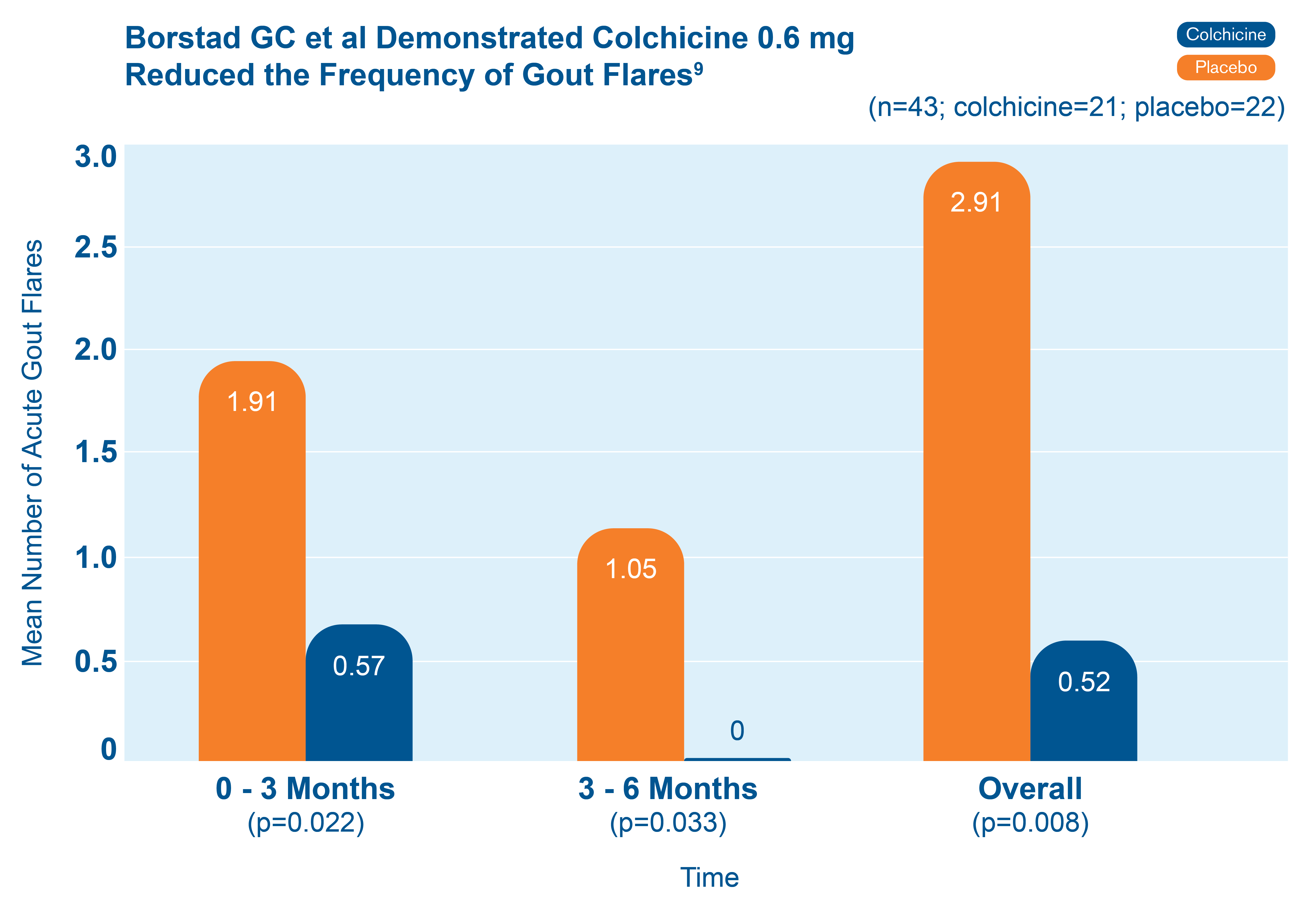 43 patients starting allopurinol were randomized to receive colchicine 0.6 mg or placebo for up to 6 months. The chart shows the mean number of acute gout flares at the 0-3 and 3-6 month time periods, and overall.9

In a six-month study of prophylactic use in adult patients with recurrent gout, colchicine 0.6 mg was shown to be well tolerated.9 The most commonly reported adverse reactions with colchicine are gastrointestinal symptoms, including diarrhea, nausea, vomiting, and abdominal pain. Consult with your doctor about other medications you are currently prescribed.

Fatal overdoses have been reported with colchicine in adults and children. Keep Mitigare® out of the reach of children. Blood dyscrasias such as myelosuppression, leukopenia, granulocytopenia, thrombocytopenia, and aplastic anemia have been reported with colchicine used in therapeutic doses. Monitor for toxicity and if present consider temporary interruption or discontinuation of colchicine.

NOTE:  This article was not written by a medical professional and is not intended to substitute the guidance of a physician. These are not West-Ward’s recommendations for gout flare prevention, but rather facts and data collected from various reliable medical sources. For a full list of resources and their attributing links, see below.