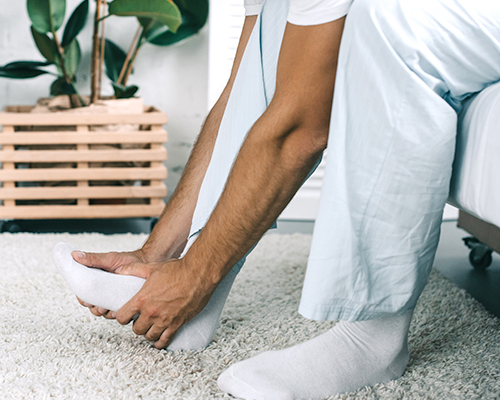 If you’ve ever woken up during the night with a burning pain in your foot, you may have had a gout flare.1 But gout can be tricky to diagnose, because its symptoms, when they do appear, are similar to those of other conditions. You might be asking yourself “How do I know if I have gout?” Read on to find out more about gout and what you should do if you think you have it.

Gout is a form of arthritis that can cause pain and discomfort in the joints.1 It is the result of excess uric acid in the bloodstream, a medical condition called hyperuricemia.1 But where does uric acid come from? And why does it build up?

The role of uric acid in gout

Uric acid is a waste product that comes from the breakdown of purines, which are a group of chemicals present in the body’s tissues and in many foods.1 In most people, the body eliminates excess uric acid through the kidneys and into their urine.1 In some people, however, either the kidneys don’t get rid of enough uric acid or the body produces too much.1 When this happens, the amount of uric acid in the bloodstream rises above normal levels.1

What happens during a gout flare

As the uric acid level in the bloodstream rises, sharp, needle-shaped urate crystals can begin to form around one or more joints.1 Once the amount of uric acid in the bloodstream reaches a certain level, the body may react to these crystals as if they are a foreign substance such as bacteria.1 White blood cells and other cells that fight infection race to the area, causing the redness, swelling, tenderness and burning pain gout flares are known for.1,2 For most people with gout, the first joint affected is in the big toe.3

Although gout flares may not happen often at first, they can become more and more common if the disease goes untreated. In addition, some people with untreated gout develop lumpy, chalky deposits called tophi that are visible under the skin around the affected joint(s).2 Untreated gout may also eventually lead to permanent damage and deformity.2

Talk with your doctor

If you suspect that you might have gout, be sure to talk with your doctor. It’s important to get the disease under control as soon as possible, and medications are available to help you manage it. You may want to download and complete the Gout Flare Questionnaire (from Resources for Patients) beforehand and bring it with you to discuss at your appointment.