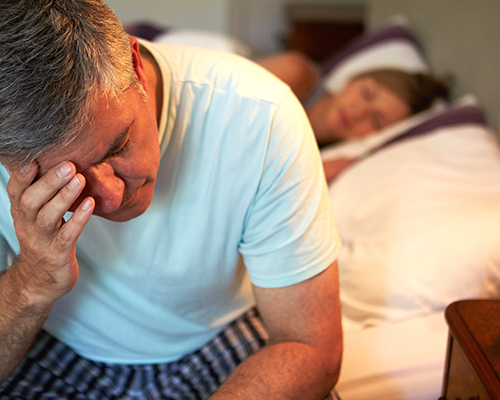 Many people with gout know what it’s like to be awakened at 3 am with the excruciating pain of a gout flare. But why do gout attacks happen at night? Dr. Hyon Choi, Director of Clinical Epidemiology at Massachusetts General Hospital, led an internet-based study a few years ago hoping to find the answer to this question.1 Read on to learn more about what Dr. Choi and his team discovered.

The relationship between uric acid and gout2

Uric acid is a waste product made by the body as it breaks down purines (purines are natural substances found in the cells of the body and in some foods). When the amount of uric acid in the bloodstream reaches a certain level, urate crystals can begin to form around a joint. Eventually, the crystals in the joint can cause the sudden and intense pain, redness and swelling you may know as a gout flare.

Dr. Choi and his team recruited 724 gout patients (89 percent men; average age: 54 years old) and tracked them for a year via the internet. Participants were asked to record the date and hour they had a gout attack, as well as answer questions about their gout symptoms, the medications they were taking and gout flare risk factors (including alcohol and seafood intake) during the 24 and 48 hours prior to the gout flare.

Study findings showed that participants experienced a total of 1,433 gout flares during the course of the one-year study.1 The results also found that the risk of a flare was 2.4 times higher overnight and 1.3 times higher in the evening than the risk of a flare during the day.1 This was true for participants regardless of their gender, age, weight, medication use or diet.1

So now that we have reviewed evidence suggesting that gout flares are more likely to happen at night1, the question remains: “Why do gout attacks happen at night?” Researchers suspect a few culprits:

Even if you stay hydrated during the day, you can lose some of your body’s fluids just by breathing while you sleep.3 And if you snore or have sleep apnea, you can lose even more.3 The same is true if you hit the sack in a toasty or overly dry bedroom.3 This nighttime dehydration is believed to contribute to the higher risk of gout flares during the late night/early morning hours.1

The dip in cortisol levels that typically happens between midnight and 4 am can also contribute to your risk of gout flares.1 Cortisol is a hormone made by your adrenal glands that affects many of your body’s functions.4

Regardless of the time of day, most people would do anything to avoid the pain of a gout flare. Fortunately, gout flares may be prevented with medication.5 One such gout medication, Mitigare® (Colchicine) 0.6 mg Capsules, is FDA-approved to help prevent gout flares in adults.5 The safety and effectiveness of Mitigare® for acute treatment of gout flares during prophylaxis has not been studied. Mitigare® is not an analgesic medication and should not be used to treat pain from other causes. To learn more about Mitigare® and how it may be able to help you prevent gout flares, talk with your doctor.5